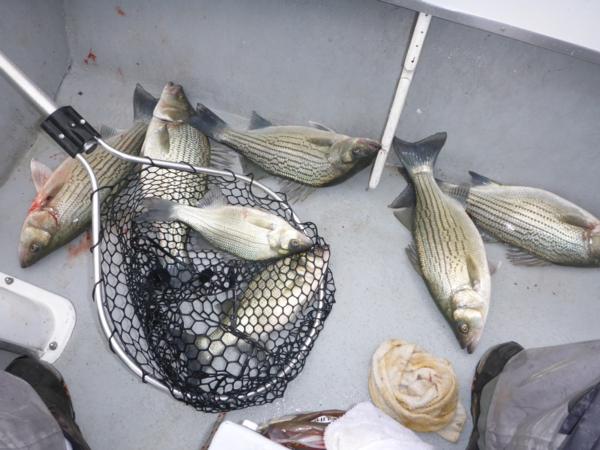 Well folks it's that time of year. Big fish are hungry and the shad are running scared. I had trips on Lake Texoma during the week last week, and it was tough, real tough. I had been catching them shallow, then the Thanksgiving flood came, the water cooled off, the bait moved deep, and the fishing went down hill for me fishing with lures.

I scouted 2 days last week on Lake Texoma, and tried to think "outside the box" and make some action happen, and it just did not produce. I'm planning on staying at Lake Tawakoni until Big Tex gets more consistent. It does take me some extra time and effort to fish Tawakoni, towing the boat and all, but it is well worth it. I want y'all to have great trips when we go and Lake Tawakoni is where it's at right now!

The water has cooled and Dead Sticking is working good. I'm able to get some good Stripers in deep water schools, and the Hybrids were tearing it up on ledges and humps Dead Sticking as well. I'm using 1.7 oz Dead Heads from Moe's Tackle and Zoom flukes. The White Ice color has been working great. For more on Dead Sticking, check out my blog on 'Dead Sticking for Stripers'. Check out some recent action here...

Birds are working to help locate schools, but there are also schools roaming around in deep water (45 to 50 ft). If you see a school of fish at 20 foot in that deep water, stop on them, beat the water, thump the boat or flip on your splasher trolling motor and get that fluke down to the 20 foot mark you might be surprised! If that school isn't wanting to play, just move on, eventually you will fish a feeding school.

Last weekend on Tawakoni was great Dead Sticking in 48 foot of water. Not a cloud in the sky, no wind, post front, soaring baromteric pressure, and they still went off around lunchtime for us, amazing!

Our trip on Sunday (Dec 13) was pretty much awesome...wind and rain and cool..could not have ordered a better day, and we were rewarded for our efforts. 70+ fish, only 4 fish under 18 inches, sore elbows and stomachs on Monday...gotta love it. Had a 6 man limit in pretty short order, then catch and release to catch another day. Multiple triple and quad hook ups, even one "5 ON", it was epic at times. Great customers, the rain finally let up and it was just an awesome day.

I've got some days open coming up over the Holidays, so don't hesitate to call and book a trip. Bring some egg nog and let's get out there!