Keep up with water temperatures; look for the warmest water you can find that isn't muddy. Stripers do not like muddy water and will stay ahead of it as it flows into the lakes after spring rains. They usually move toward their spawning grounds when the lake warms into the lover 50s. On Lake Texoma, they will begin their migration toward the Red River on the west side of the lake and towards the Washita River on the east and north part of the lake. These fish have been documented as far as 50 miles up each of these rivers during their spawn.

As they move, stripers stop and feed along key main lake structures. Long slow tapering points that connect with the deep lake river channels are especially good. It is always a good idea to check these points beginning in the middle of the lake, working your way up the lake until you locate schools of stripers utilizing your fish finder. Some stripers may stay on long points and attempt to spawn there rather than move into the headwaters.

As the water temperature approaches 60 degrees, look for shallow points in the upper end of the lakes. Clear flowing water attracts spawning stripers, so don't be afraid to venture into extreme shallows upriver. If these areas are muddy, move back down the lake until you find clear water. Start looking for humps and points, that is where the stripers will be. Casting swim baits in these shallow waters will get you some results.

This is prime time for catching Striper on slabs and topwater lures! Stripers are likely to be deep during the day and shallow at first light and dusk. Usually, by mid-July, the fish will be congregating in the main lake areas towards the dam. Using your fish finder, you will find large schools of bait and fish in deeper water. Dropping slabs on them will get you some fish in the cooler. In the early mornings and late in the evening, the Striper will utilize ambush areas to hit big topwater lures in shallow water as well. They key this time of year is to locate bait and you will find fish not far away.

This is a time of transition for stripers. As the water cools, Stripers will begin to feel the change and start their feeding in preparation for the cooler months and the Spring spawn. When it drops down to the mid-60s, stripers move much shallower and will be catchable early and late in the day on long main lake points and humps, and in the deeper creek arms. Feeding activity is likely to be intense now, so faster moving presentations should draw savage strikes. Topwater lures and swim baits are very useful this time of year.

When the water temperature drops into the mid-50s, stripers move shallow and gorge themselves on baitfish. In many instances, they will feed near the surface. Key in on shallow flats, points, and creek arms. These Stripers can get lazy this time of year and they want to feed efficiently. They want big meals that are moving slow. Bigger sassy shad swimbaits and bucktail jigs with 10-inch trailers work well in February and March on those huge trophy fish. Remember low and slow for the lazy lunkers! 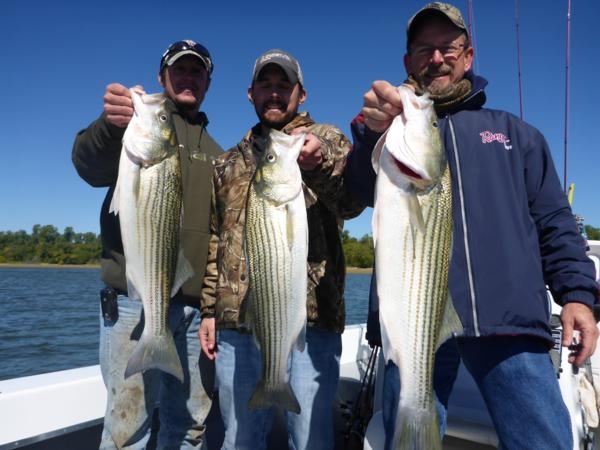